c505218304b50c59c3659f6dda43bae7-links-0–>c505218304b50c59c3659f6dda43bae7-header-0–>
Appropriate selection, sampling and proper storage of biological evidence are important, yet sometimes overlooked, steps in forensic toxicology. These factors, in combination with drug stability, can profoundly impact the interpretation of results and the outcome of forensic casework. Criteria surrounding each of these are presented and discussed in the material that follows. Further reference to tissue sampling will also be found in other chapters in this book and will be cross-referenced within the text where appropriate.

Selection of the appropriate specimen is a critical component of any toxicological investigation. Circumstances surrounding the case, the availability of specimens, the nature of the investigation and even legal or statutory issues may dictate which specimens are selected, and for what purpose. Timing is an important factor in specimen collection, particularly in ante mortem cases where some drugs have short detection times and therefore limited detection windows; examples include detection of an elevated concentration of D 9 -tetrahydrocannabinol (THC) in blood from an impaired driver, or of g-hydroxybutyric acid (GHB) following an alleged drug-facilitated sexual assault. Post mortem specimens pose additional challenges owing to autolytic and putrefactive changes. Timing is also important in death investigations because it becomes increasingly difficult to obtain good-quality specimens as the time between death and sampling (postmortem interval) increases. Factors such as embalming of the body, decomposition or burial can further complicate interpretation if tissues have been preserved, if specimens are putrefied, or if exhumation is necessary. In order to be able to select the appropriate specimen(s) the toxicologist should have access to the case history, autopsy records/pathologist’s report and all other relevant documents. Some of the important specimen selection considerations are listed in Table 28.1. Collection and sampling Specimen containers.

It is important that the specimen container is appropriate for the intended use and does not compromise the analytical findings. Container size should be appropriate for the volume or weight of the specimen so that headspace is minimised. Typical specimen collection quantities are given in Table 28.2. Excessive headspace in the container can increase the chance of oxidative loss, volatilisation of analyte (e.g. ethanol and other low-boiling-point compounds) or salting out, which mayoccur if preservatives are present. Some analytes have a tendency to adhere to plastic or glass surfaces depending on their physicochemical properties. Silanisation of glassware can reduce adsorptive losses for drugs that are present at trace levels (10mg/L or less). Although glass containers are preferred by many, disposable plastic containers are used routinely for a wide variety of postmortem tissues and ante mortem samples, particularly urine. If glass containers are used, it is important to make use of appropriate racks for storage and transportation. One of the major disadvantages of glass is the possibility of breakage, particularly during storage at low temperatures. In order to minimise sample loss, glass containers are preferred if volatile analytes such as solvents or anaesthetic gases are suspected. Plastic containers are more susceptible to interferences by plasticisers such as phthalates that might interfere with the analysis. The use of an inert plastic such as Nalgene decreases the likelihood of chemical interference, but it is good laboratory practice to evaluate all new specimen containers prior to routine use in the laboratory. If plastic containers are chosen, their integrity at low temperatures should be evaluated. Polystyrene is more susceptible to cracking at frozen temperatures than polypropylene vessels. Rubber septa or liners in screw- cap containers should be avoided and replaced with inert liners (e.g. polytetrafluoroethylene (PTFE), or Teflon) to reduce leakage and minimize drug adsorption.

Ante mortem blood samples are generally collected into evacuated glass tubes such as Vacutainer or Venoject for forensic toxicology purposes. Collection of blood into similar glass collection vessels is also good practice in postmortem blood sampling. These tubes allow the sample to be collected into a vessel that already contains necessary additives to stabilise and preserve the matrix. Proper mixing is necessary when sodium fluoride or other additives are used to ensure that disso lution is complete.

Blood is one of the most important specimens of toxicological interest as it provides unique advantages over other matrices in terms of the wide variety of analytical methodologies available, the vast amount of published reference data for both antemortem and postmortem drug concentrations, and the interpretive value of the matrix from a pharmacological standpoint. However, antemortem and postmortem blood samples are not ably different, and the site of the postmortem blood draw (central or peripheral) can be of critical importance. Determination of parent drug and metabolite concentrations (and their ratios) may also yield useful information pertaining to acute or chronic use.

Antemortem blood is collected by venepuncture, typically from the antecubital region of the arm, using a syringe or evacuated container (e.g. Vacutainer, Venoject). Prior to collection, an antiseptic wipe is often used to clean the collection site. Non-alcohol-containing antiseptic wipes such as Betadine (povidone–iodine) are preferred to avoid any contamination that could interfere with alcohol analysis. Although evacuated blood tubes are typically glass, plastic tubes have also been evaluated (Karinen et al. 2010). Postmortem blood Postmortem blood collected at autopsy is quite different from antemortem blood collected by venepuncture from both qualitative and quantitative standpoints. Postmortem blood may be more viscous, may contain numerous small clots or sedimented cells, has a lower pH (as low as 5.5 owing to protein degradation), may contain 60–90% water, and is subject to varying degrees of haemolysis. The site of blood collection should be clearly identified on postmortem specimens and blood from different sources should never be combined.

Cardiac blood samples are ideally collected following opening of the pericardial sac, removal of the pericardium, and removal of the blood from the left or right chamber after the heart has been dried. Collection of central blood by insertion of a needle through the chest wall (‘blind stick’) is practised but is discouraged. Although central blood collected in this manner may be identified to the laboratory as ‘heart blood’, it may be contaminated with pericardial fluid, fluid from the pleural cavity, or blood that has drained from the pulmonary vein or artery or the inferior vena cava (Jones 2007). Blood collected in this manner is considered non-homogeneous. Central blood may contain elevated drug concentrations as a result of postmortem redistribution or contamination (diffusion) from other body compartments (Prouty, Anderson 1990; Yarema, Becker 2005), especially following blunt force trauma. Passive drug release from reservoirs such as the gastrointestinal tract, liver, lungs and myocardium may occur immediately after death; later, cell autolysis and the putrefactive process participate in redistribution (Pelissier-Alicot et al. 2003). Drug properties such as volume of distribution, lipophilicity, protein binding and pK a play a role in the site and time-dependent mechanisms responsible for postmortem redistribution. Drugs with high volumes of distribution and basic character appear particularly susceptible to postmortem redistribution and their cardiac blood concentrations should be interpreted accordingly. Postmortem redistribution can account for central/peripheral blood drug concentrations that differ by 10-fold or more. Redistribution is time and concentration dependent and is very difficult to predict. Cardiac blood is typically more plentiful than peripheral blood. Although cardiac blood can be a very useful specimen for screening purposes, the relationship between cardiac blood drug concentrations and antemortem blood drug concentrations is complex. Many toxicologists therefore advise against the use of cardiac blood for quantitative and interpretative work.

Femoral blood is the best specimen for use in postmortem testing (Chapter10) and should be sampled wherever possible. Blood collection from a ligated vein that has been ‘tied off’ is least likely to be contaminated by other sources of blood or a result of release of drug from tissues and organs. Typically, however, a ‘femoral stick‘involves the collection of femoral blood from an unligated femoral vein in the groin area. Only a small volume of blood should be collected to avoid ‘milking’ the vein and drawing blood from other sources. Typically 10–20mL of femoral blood can be collected. Over-sampling of blood from the femoral vein will draw blood from the inferior vena cava, and hence the liver, and from the larger iliac vein. Although sampling from a ligated vein is generally preferred, a comparison of drug concentrations in clamped and unclamped femoral vessels showed good correlation for eight drugs including selective serotonin reuptake inhibitors, benzodiazepines, antihistamines and one opioid (Hargrove, McCutcheon 2008). If femoral blood is not available, subclavian or iliac blood may be an alternative.

Following a fall or blunt trauma to the head, a victim may survive with circulation intact for several hours. Owing to the decreased circulation in the damaged region of the brain, drug or alcohol concentrations in blood clots (e.g. subdural, subarachnoid and/or epidural) may be influenced by incomplete metabolism. It has been suggested that intracranial blood clots may serve as ‘time capsules’ prior to death, because they may reflect drug concentrations several hours prior to death, when an injury may have taken place. 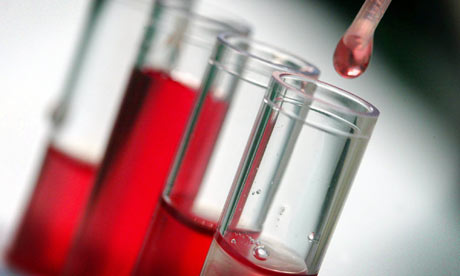